Here we go again, with the West treating women like intentions gone bad and the unnecessary cruelty to women, the Invisible Man-type misogyny is once again being employed here for the sake of entertainment and then the West points fingers at the modest folks, from underdeveloped states for whom a woman is not only to be taken care of but given utmost respect and treated with honor. I’m not at all implying that crimes against women are completely defeated by the “modest ideology“, there will always be deviant men (and women: Karla Homolka) and that crime is a bi-product of an uneven society, just that the deviancy will not be made into something normal, or standard or gay even as a malicious afterthought. 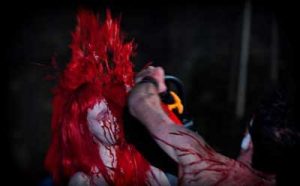 On the other hand, we have an entire sub-genre to cater to the need of men, like this film where everything “woman bashing” goes, in bad taste; wait, it’s all in bad taste, the misogyny, and double standards and hypocrisy. They will not learn, even go to the extent of placing the woman at important positions, like Sen. Kamala Harris and Lashana Lynch as the new 007, but that’s hogwash when deep inside the resentment is still there and so is Playmate of the month. Like how Rami Malek won an Oscar for lip-synching and Val Kilmer got thrown out of the spotlight because he was too hard to handle as Morrison and also sang a total of fifty-two songs for the film, The Doors, 1991.
Never mind, “The West is the best – Get here and we’ll do the rest“.
What looks like amateur porn, sophisticated (if I may) amateur porn, happens to be enough funny, campy with Victoria Hopkins (Google Images please) as the badass rock star/zombie killer in leather pants and graciously displaying a rather wholesome cleavage, hot-blooded and all. Plus, Satan is not in the least gory except for one stock footage. Therefore do not let the images fool you, or put you on a tangent, yes, the tangent of just touching the curve(s) is plentiful, however, the gore is limited to a click-bait call by the producers. This thing has a producer? Yes, and his name is Steve O’Brian.

This is a sure-shot propaganda against the self-indulgent and decaying Western culture, and it comes across as occasional fun with an excess of female nudity. It took two people to direct this Z-grade bunny? A pretty incomprehensible film that does what it likes to do, with the jokes being funny and flat in equal quantity. And there are few really likable characters. “Satan is lowbrow, craptastic good time, exploding with cheap (almost) gore gags and bountiful nudity”*. The film is adolescent in tone and content, and the zombies are played mostly for visual objectification and batting practice, just like how the women are in films in general, metoo or not, Disclosure, 1994 with Michael Douglas, Demi Moore, Donald Sutherland, or not. Crying and scheming or leading an entire town or her family to hell or not, Hagazussa: A Heathen’s Curse, 2018 and The Witch, 2015. Something to empower the women, and not parade them naked like dogs on a catwalk. The West and many liberals think that putting a woman up for the show, to watch her being fucked or tortured is empowering (for whom?). Even some women fall for this illusion, by saying that they will do and wear whatever they want, not realizing that the killer or the rapist is thinking the same and getting even more excited when he watches women bare all, he sees it as an invitation. This pilgrim is not shifting the blame, oh no, just spelling out the triggers, some impulses (and the criminality that follows) are extremely hard to deny. There’s discipline and in this age of the “speedy everything”, that one’s a dying trait. It can be done but are the kids willing to put that phone down for even ten minutes?
We have FBI profilers for serial killers, once we have those for serial rapists, perhaps then we will know what drives men like these, the deviancy and how does it take such ugly shape. Women are not to be treated as commodities. It’s the 21st Century for fucks’s sake.

Oh, there’s also Pervo the Clown. The rest? Don’t ask, don’t tell. There’s also a type of zombie, a wheelchair-bound zombie that squirts acid from her breasts.
Dodge that.

Watch it if you like straight-faced, cheeky Brit humor, which at times gets really off or really effective if not all the time, because of the dreadful and pitiful and lamentable editing by Richard Johnstone. 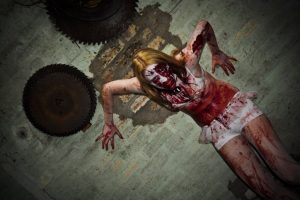 I guess now would be a good time for some Michael Bay CGI happiness and the Transformers Franchise will serve just perfect.