Made right after Wes Craven‘s gritty, ultra-violent exploitation flick The Last House on the Left, 1972 that contributed to the mutilation of cinema, after garnering a strong cult following through the years and re-made in 2009 with (SPOILER) a zero impact “and they sailed and sailed in a boat happily ever after” ending (SPOILER ends). The idea or the notion of chaos is similar to an equitable pattern of concepts, such as differential equations, resonance, nonlinear dynamics, and probability. B-grade, cinema-sewer, low-budget, shitty picture, and what have you, well, had I waited for a legit outing to formulate chaos and the coercion behind the fallacy of serenity. “God does not play dice“, says Einstein (Einstein-Podolsky-Rosen [EPR] paradox, 1945), but what does he know?

Craven’s influences are idiosyncratic. Then, a few years down the road, along came a very bad-man with third-degree burns on his body, a Christmas sweater, a tilted dusty fedora, and a metal clawed glove which, he uses to decommission young, clueless, kids of Elm Street and also Johnny Depp (what the fuck is wrong with Freddy, and now Depp? Everything). Freddy is the best, even after two hundred years; Depp is still afloat but no one knows for how long. The narrative has been made complicated once again as it has been since Cry Baby, 1990 and What’s Eating Gilbert Grape, 1994 to Dead Man, 1995 and the Pirates anthology.

Returning to the film at hand; even though filming and post-production of Dead End Street had ended by ’73, the film was to be released four years later, after the violent protests stopped. 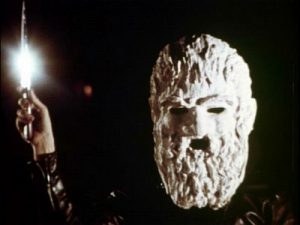 The film (made for $10,225 as of 2020) is an inspiration for director Fred Vogel of Toe-Tag Pictures. After reading Vogel’s interview with traumaticcinematic.com, where he admits to Dead End Street being an early influence on him and the films he was to bombard us with, later, I was more than intrigued to watch this snuff/slasher from Hair Peace days. I still dig the trim.

Coming to the film itself, well, can I just stop here?
Yes?
Alright. 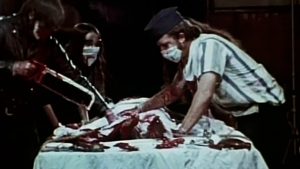 However, it’s my responsibility to warn the viewers of the highly disjointed story-telling, nonsensical script – ‘I will make a movie that no one has ever made‘; sure whatever you say Roger Watkins (late), Midnight Heat, 1983 – the impatient editing that is too self-aware, resulting in jump cuts during scenes that should’ve continued until the victim is dead and her chest is still rising and settling slightly. Did I mention bad photography and bad acting coupled with a genuinely indisposed tone of the film simply make the viewer uncomfortable and the pay-off is total blue balls? 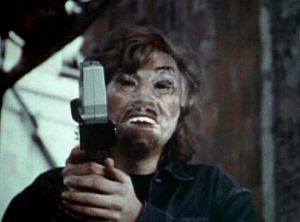 Applauded by some for having a “distinct catalog of horror”, washed-out setting, and the in your face dissentient voices castigating as worthless diatribe and catalyst for almost all murders committed in the name of film (an intrinsically flawed film), the advocates of Dead End Street claim it to be an “intelligent film” which, it is considering the year it was made in when pulling out guts from a dead woman (still breathing) was as shocking as putting them back in is, now.

Roger Watkins, somewhat of a deviant, mostly directing under a pseudonym – freedom of speech? Oh, I forget, Emmanuel Macron and Charlie Hebdo and the denial of the holocaust, which they will not go near and stick to sticks and stones written in blood.

In conclusion, Dead End Street is a story about a man who is really upset after being sent to the Jam for drug possession. A year later he’s freed and starts making snuff with his former associates and their wives as his victims, albeit not without the help of Otis from Henry, or so it seems; a cameraman from the pits of film hell and two women whose perpetual extremely ingenuine laughter makes the film even more enduring to watch. Then come the special effects. As soon as the drill is supposed to make contact with an eye of a victim, the scene shies away to women laughing like idiots. As soon as a leg is amputated, there is enough blood on the surgical bed to fit a tooth extraction. You just cut off a grown human limb, man. Ridiculous. 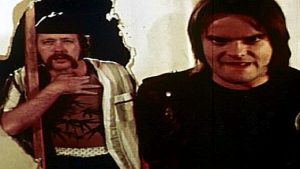 Watch it only to experience the roots of US extreme cinema sprouting a plant, a carnivorous plant. Not France or Greece or Italy or Russia, but this time the US.

Note: I realize I went on and on after agreeing to stop when I did. I can’t help it; one of the reasons that the hallucinogens got the better of me.