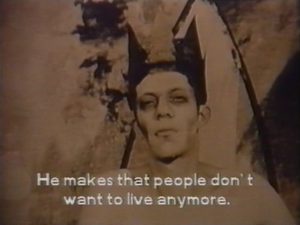 So this is art-house horror? I wouldn’t have known had I not watched this cadaver autopsy experiment gone horribly wrong by turning my back to the screen, bending and watching it from between the legs.

The film shows us a death or two or three spanning over seven days, beginning with Montag and ending on a Sonntag. It focuses on suicide; rather it shows the banality (without having done much or any research, it seems) on suicide and also tries very hard to make the act seem sacred and powerful. It fails miserably though, to its horror. With dust, maggots, spinsters, fish, first-blood, retardation, no script, cheap film and bad acting the emotions and the sterile message, under rug swept.

Todesking begins with a nude man lying on the floor and eventually rotting, a body decaying in time lapse. At one point the thing looked like the robot from I, Robot and then shit got real. This being the central framing which, the film keeps returning to. Existential-angst, horror director Jörg Buttgereit (Nekromantik, 1987) shows to us how random people take their own lives and sometimes that of others. The film takes itself so seriously that it writes it down for you, it reads out its philosophy to you; straight from a red book (not that Red Book), it distributes handbills with its ‘ah, such intellect, I can suck my own cock‘ messages (read bullshit metaphors that look like old anti Gestapo/sexploitation films from Jesus Franco) printed on them.

It is all so serious that the last shot is of the poster in close-up, panning from top to bottom and a girl drawing The Death King in her notebook. She looks into the camera and says, “he makes suicide”. Like, manufactures it. Oh, for fuck’s sake.

It also gives itself a brain haemorrhage on Sunday by banging its head against the wall about, say, fifty times or so.

That is one asshole way to go. No, but seriously, why so serious, again?